<<< Back to category
Author: McLaren.press 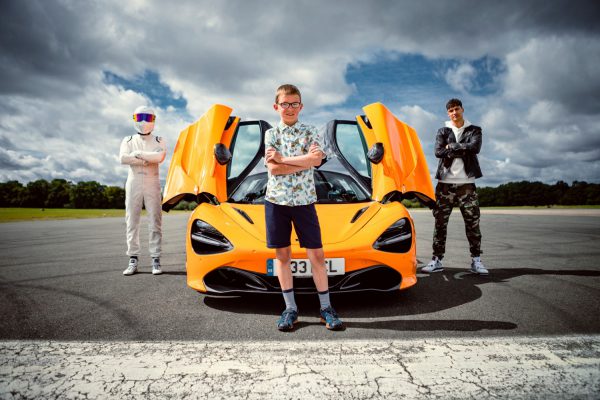 Taking inspiration from nature, using advanced materials, and capable of being grown on a tree - combined with stunning supercar looks - were the hallmarks of the winning design of McLaren’s ‘supercar of the future’ competition unveiled live on CBBC’s Blue Peter.

In one of Blue Peter’s most popular competitions, Alex’s design was chosen from thousands of entries received following the competition’s launch in May.

Design Director Rob Melville and his team then worked with Alex to turn his ideas and initial sketches into a large-scale clay model as well as virtual renders to bring it to life.

And in honour of Alex’s winning design, McLaren and its paint partner AkzoNobel have developed a special ‘Alex Leaf Green’ paint colour. Like all the other paints used by McLaren, it is water-based and customers can now choose to have their real-life McLaren personalised and sprayed by hand in the special new colour.

Alex’s prize included not only an orange Blue Peter badge, awarded to competition winners and runners-up, but also a VIP trip to the McLaren Production Centre in Woking, Surrey where brand ambassador Amanda McLaren welcomed him and showed him where the supercars are hand-built. He also met with Rob and his team to work on his design and scientist Ella Podmore to discuss his car’s lightweight materials.

Then Alex got to experience a supercar for himself with some special laps in a 720S driven around the TopGear track by The Stig himself.

“Meeting Rob, Ella and Amanda, seeing where the supercars are made and getting a ride in a real McLaren has been incredible.

“I liked working with the designers to see my winning design come to life and being able to sit in my design virtually was incredible as was getting to experience a 720S driven by The Stig around the TopGear track.

“I’m always sketching and drawing, especially cars, so to win the prize was amazing and after this I definitely want to work on supercars and new technologies when I’m older.”
Alex, ‘supercar of the future’ competition winner

“Alex’s winning design was an instant standout with all the judges. It’s clear that not only is he a gifted artist but he also has a clear vision and interest in science, how things work and what objects are made of. Those factors combine at McLaren and lead to technology and performance benefits. His idea of growing cars on trees is so innovative which is also so true to McLaren’s spirit. If we can grow human body parts in the lab now, then why not sustainable car parts in the future?

“I hope the supercar of the future competition inspires others to be creative and to really push the boundaries of what we think is possible. Supercars are a very tangible expression of how art and science combine and produce innovation so some of the ideas we’re working on – and that Alex has come up with – will help create breakthroughs and future transport solutions that we can all benefit from in the future.
Rob Melville, Design Director, McLaren Automotive

“We’d asked the Blue Peter audience to design something completely unique and we were overwhelmed by the creativity, effort and ideas that we saw.  Well done to our runners up, Emily and Ossian, and all of the 8,000 kids from across the UK entered this competition, you are amazing!

“It was so hard to decide a winner, but Alex’s Superganic 3000 car shaped like a green leaf stood out.  He described his design as “sleek, streamlined, lightweight and incredibly beautiful” and we had to agree. Who can imagine if in the future there will be a biodegradable supercar made from graphene and powered by photosynthesis?”
Ellen Evans, Editor, Blue Peter