<<< Back to category
Author: Kseniya Goncharova

Serhii Stakhov – The Oyster King: “My dream is to make seafood available for Ukrainians”

Our story-maker is an ambitious trendsetter who has created oyster and seafood fashion in Ukraine and has made a gourmet food available to all. The owner of the largest domestic seafood importer OKEAN, a successful restaurateur, the founder of the first oyster bar Matza and Oysters in Ukraine, Serhii Stakhov told MILLION about his way to success, the subtlety of business and has revealed the secret of what Ukrainians will order at their favorite restaurants soon. 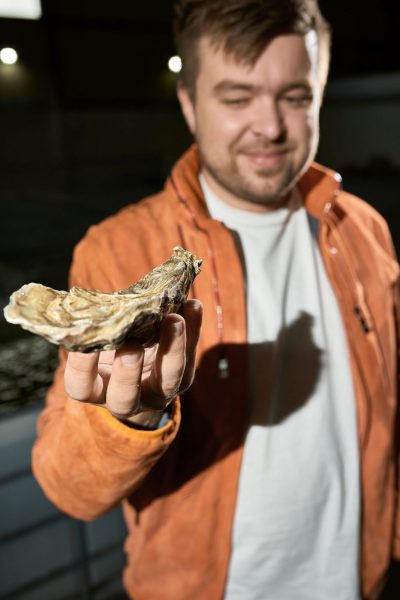 We are at the new OKEAN warehouse. Tell us how everything works here and how the oysters live?

Here, you can see the so called system of oyster overgrowth. It is a seawater pool that is never turned off. It works 24/7. In fact, we are reproducing for oysters the true ocean of the type we need right now. We can regulate the water temperature, salinity, the concentration of marine life, bacteria and microorganisms. These are our own refinements of existing world practices.

In Ukraine, our company is the flagship of the seafood storage system. Besides supplying oysters to restaurants all over the country, we also install and maintain special aquariums where oysters can exist under established conditions and be served fresh on the table.

You have already secured the title of “Oyster King” of Ukraine. How long ago did you start importing oysters and seafood?

I've been doing this business for about five years. When we entered the Ukrainian market, it has not  yet been ready for it. But we acted confidently. We had a dream and a goal and we knew that we were on the right way.

Today, OKEAN holds about 50% of oyster import market in Ukraine. In a very short time, we have created a culture of oyster consumption amongst Ukrainians. We’ve managed to get the oyster from the category of premium class product to the category of mass-market. I did not intend to earn as much as possible. I wanted to make oysters affordable and popular, thereby creating my own market where our company could dictate its terms and did it happen. 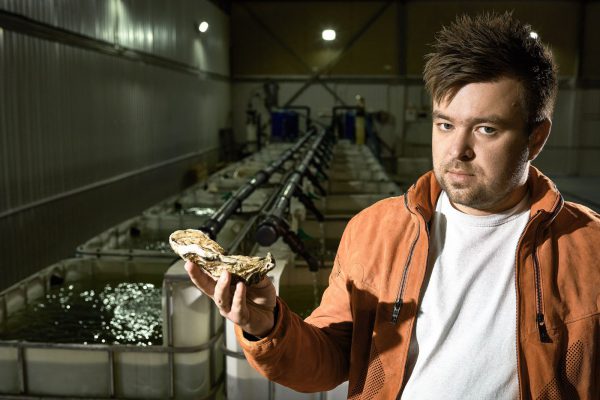 How did you come to such an innovative business for Ukraine that time? And how did you manage to cope with its subtleties?

It is clear that when I was a child I never dreamed of becoming an oyster importer. But during my life I traveled a lot, lived in Europe. I have always wanted to make seafood in Ukraine as affordable as meat. In European restaurants, the price difference between fish and meat dishes is always much smaller than it was before in our establishments. In Ukraine, seafood was something elite, inaccessible and very expensive. So we brought a lot of product to the market and therefore reduced its price.

You’ve started with the importer tastes room, which instantly has become the fashionable oyster bar Matza and Oysters. Then you opened a full-fledged Matza and Oyster - Riviera restaurant, which immediately became trendy in Kyiv. Was it difficult for a wholesaler to become a restaurateur because these businesses have different points and subtleties? How did you manage to cope with all this?

Our company has been developing rather quickly. I had the idea to open a tasting room where our customers could taste different kinds of oysters. But in the process, we decided to build the first oyster bar in Ukraine. I believe that Matza and Oysters has become a locomotive of oyster business and oyster culture in Ukraine. I personally selected all kinds of oysters we imported, looking for new varieties that have not yet been tasted in Ukraine. I talked a lot with the bar customers, as almost 80-85% of my first clients have tried oysters for the first time and in the first year of Matza and Oysters existence they’ve eaten 12 tons of oysters.

At the same time, we were developing distribution in other restaurants. Now we supply oysters to over 500 establishments across Ukraine.

What is the most difficult in your business?

The three pillars of oyster business are logistics, warehouse and human relations and if these processes are well-established, then everything starts to work like a clock.

You should always remember that everything is held in a personal relationship. I make friends and keep in touch with all oyster manufacturers and suppliers. This business needs my constant presence.

Our principles are not to let down our customers, always deliver fresh products, never cheat and deliver only original oysters. 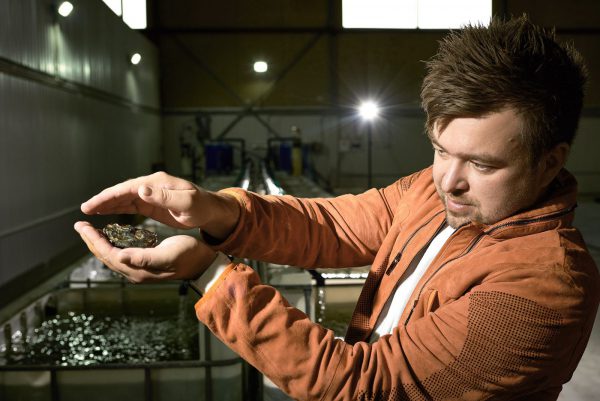 Is there any statistics: how many oysters do they consume in Ukraine per year? How it has changed, for example, compared to the figures of five years ago?

We import oysters directly from France, the Netherlands and Ireland. If we talk about statistics, it is about 20-30 tons of oysters per month. Previously, this figure was two hundred times smaller. Five or six years ago, there were very few importers in Ukraine and the quality of storage was very questionable.

How to choose the oyster correctly? Are there any product standards and certifications?

Of course, there are. The restaurant that purchases goods from the vendor must receive all relevant documents. The visitor has the right to ask for the quality certificate, oyster origin and consignment note, where it will be written when the product was delivered and its expiration date.

If the oyster is stored in the fridge without the aquarium, it should be consumed within up to 10 days. If oysters live in a saltwater aquarium at a temperature of +2 to +5 degrees, they can be stored there for up to a month.

If the oyster opened up a little bit and is no longer closed, discard it immediately. The first sign of stale oyster is the fact that it does not reduce the “eyelashes” when lightly pressed with a knife after opening. The oyster should be alive, and then the touch causes a reduction in nerve endings. If this does not happen, you cannot eat this superfood.

The open shell and the absence of cuts indicate that the oyster has already died and its use is dangerous due to possible serious food poisoning with ammonia.

Which variety of oysters is considered to be the most delicious and privileged?

The world's most popular oysters are French Fine de Claire. These are oysters that have a neutral, mild taste and appeal to most people.

But I want to be an innovator in this field as well. I am constantly looking for and bringing new kinds of oysters to the Ukrainian market. I want to offer exclusives to our customers.

Farmers obtain new types of oysters with interesting tastes using different natural conditions. For an oyster, the main thing is water it lives, grows and feeds in, because most of the oysters we see in the European restaurants are from three French nurseries, from which oyster fries are spread across different farms and continue their lives acquiring different taste depending on the region and the composition of the water. This means that one type of oyster may have a completely different taste depending on where it grew and where it came to your table from.

Giant Pacific oysters are divided into Fine de Claire and Special de Claire. The former have a salty taste and normal filling (meat filling index is up to 10.5% in the shell). They are bred in clergy - special dug channels with phytoplankton, which is the main oyster food.

Oysters with higher meat content are called Special. This type of oyster is aged in clerks for up to two months to provide the clam with all the necessary elements and bring it to a more sophisticated level.

When the oysters are already in Ukraine, our task is to create such living conditions that will be as close to those they grew up in as possible. Our oysters convey the impression of the “first water” and retain the taste they have acquired on their home farm in Europe.

My last discovery is the Black Queen Oyster. We’ve found this species in France. It grows only on one farm and has a unique soft taste, which is achieved through special refinement under a secret formula. The oyster itself grows in Ireland and then acquires its tastes in France. It is very different in taste, characteristics and beauty of the sink. 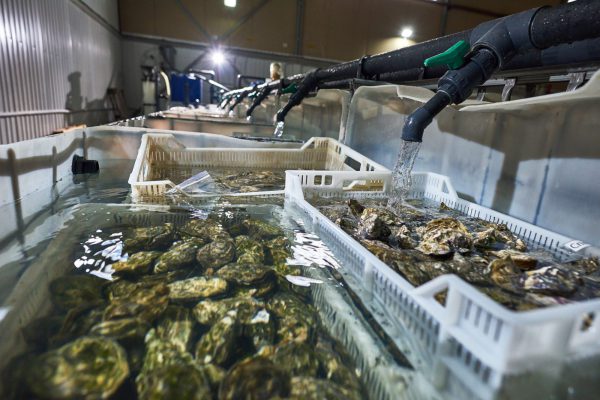 What new products do you plan to make popular in Ukraine in the nearest future?

Oysters, lobsters, octopuses and crabs were just the beginning. Now we are actively starting to enter the market of fish and other seafood. In the next five years, I plan to bring the Indian Ocean to Ukraine. I am sure that rich waters of this ocean will feed the whole Europe and the whole world very soon. 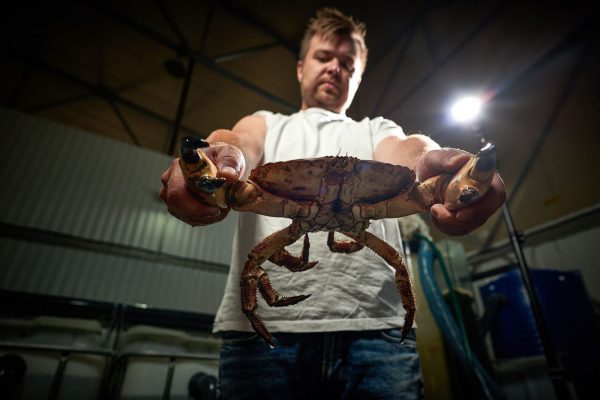 We have already brought 12 fishes that have never been imported into the CIS countries. This is the fish that Ukrainians will soon eat at their favorite restaurants.

Right now, exclusively for MILLION, I will open a parcel from India, in which the gold Dorado (mahi-mahi) in a shock freeze came to Ukraine for the first time. This fish flew here for 12 hours by plane and due to freezing at - 60° C has retained all its useful properties. 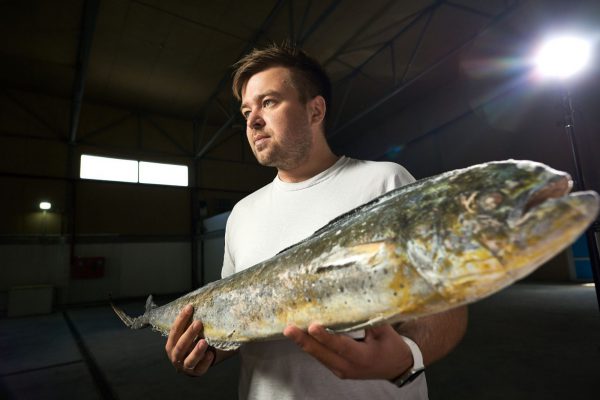